As religious groups camped outside the British Museum to show their disapproval of its newest exhibition, questions arise. Have any of them actually seen the show? And is there really a reason to be outraged over the illustration of such an important aspect of our lives?

In Chinese belief, the recipe for longevity is to keep the balance of yin and yang in society as well as in the individual. Sexual practices were one of the ways of controlling this balance and ensuring health. According to an ancient belief, a climaxing woman radiates a life-prolonging energy. This superstition was so strong, that even Chairman Mao used to ‘practise longevity’ with numerous partners, despite claiming to have rejected the traditional beliefs.

In tantric Buddhism the perfect unison of compassion (male) and transcendent wisdom (female) is depicted in a form of Yab-Yum (father-mother) images, a coupling pair of deities. 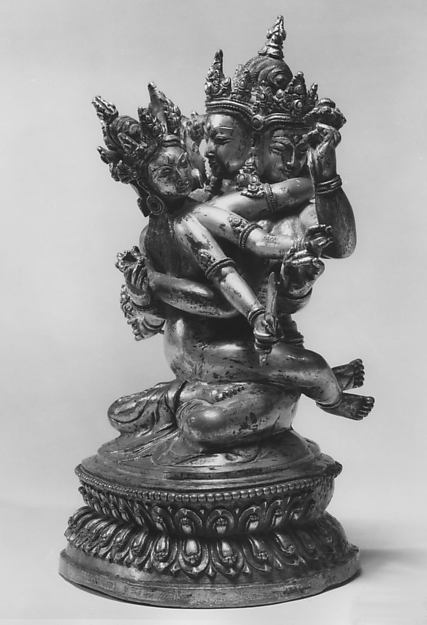 
Japan joins Buddhist beliefs with the Confucian philosophical system and the indigenous animistic religion Shinto. In Shinto rites, the fertility of people is closely connected to the fertility of land. Celebrating sexuality is therefore believed to secure the return of spring and opulence of harvest.

Yearly, on the first Sunday in April, the local community gathers around the shrine of Kanamara in Kawasaki to celebrate the Festival of the Steel Phallus. A huge wooden penis is carried on a platform around the streets. All participants, including children and the elderly, participate in the parade. The festivities are meant to protect economic prosperity, good harvest, easy delivery, marital harmony and sexual health. Pictures, carved vegetables and candies, all depicting penises are sold during the event.

Shunga, however, most certainly were not produced for religious contemplation. Some scholars claim they were specifically targeting the army of single men in Edo, also called The City of Bachelors(1), but shunga specialist Rosina Buckland disagrees(2). Clear evidence suggests that shunga were added to the wedding dowry of less experienced brides to prepare them for adulthood.

‘Shunga were widely available in Edo Period Japan. Of course their production was controlled by the government, but they functioned in everyday life on a scale incomparable with the Western world’, says Paul Binnie, contemporary Japanese style woodblock print artist and collector of Japanese art. ‘Of course they concerned the private sphere of life and were not publically displayed, but not necessarily frowned upon’, he continues. This relaxed attitude resulted in market demand. ‘The greatest artists of the day designed shunga and were proud of their works. They are relatively easy to come by and simply a fun thing to have in one’s collection’, adds Mr Binnie.

Shunga were executed with the same attention to detail and utilised the best available artistic techniques as the most desired works of high art. They were often very expensive. They are art in all respects, although slightly surreal with their lack of anatomical correctness and fantastic stories. An anonymous source from 1861 aptly observed: “a foolish couple copy the Shunga and pulls a muscle.”

The curators at the British Museum have approached the subject with tact and subtlety. The exhibition gives a great overview of the historical and cultural background of a sphere of life that is important and relevant to all of us. Definitely a must-see for both enthusiasts and the unconvinced, hopefully it will change the way shunga are seen and judged from now on.

1. The large number of single men in the capital was a result of Sankin-kotai- a law decree enforced in 1635. It literally means ‘The alternative attendance law.’ It was introduced to control major warlords in Japan by having them in the capital and their province on alternate years. As a result they had to maintain two households and travel between the two locations with a whole entourage of warriors. Their families were kept in the capital as hostages. The law remained applicable until 1862.