The striking iridescent blue of kingfisher feathers has been highly prized in China for at least 2500 years.

Their widespread use in hair ornaments and jewellery gave rise to their being acknowledged as symbols of feminine beauty, while the sheer reality that a kingfisher is an extremely small bird and difficult to either catch or rear in captivity caused them to become symbols of wealth and social standing.

While once only available to the Imperial Court, over the centuries this filtered down into the aristocratic strata of society and became another source for silversmiths to create an art form that was excruciatingly difficult and time consuming to produce. The art of kingfisher feather inlay, known in China as the art of tian tsui, literally means “dotting with kingfisher”.


China’s fascination with the kingfisher appears to have begun during the Eastern Zhou Dynasty (770 – 476 BC) when poems were written extolling their colour and beauty. During the Han Dynasty (206 BC – 220 AD), palaces were decorated with kingfisher hangings and wall panels. Unfortunately, not many kingfisher feathers ornaments from the early age survive to this day, as they are notoriously favoured by certain small insects.

The art of feather inlay requires a base and frame to contain it; since only the seriously wealthy were able to afford it, this “captive audience” was of obvious attraction to the silversmith. The inlay process requires cutting tiny pieces of iridescent feathers and combining it with crystal-clear glue that would be set within a silver gilt frame and base, to give an overall effect that was not visually dissimilar from cloisonné work. Sometimes the inlay work is so fine it is almost impossible to understand these are feathers - it could easily be mistaken for enamelwork.

Using the special glue treatment the art of tian tsui required was almost exclusively used in hair ornaments, coronets and brooches. The technique simply was too fragile to be incorporated into usable silver objects.

"I bought a kingfisher pin the wonder worker, a patient, spectacled Chinaman, takes a single hair from out of the bird's wing, draws it through a bit of glue and lays it on the silver foundation. Then another hair, which he lays beside the first. Then another and another and another, endlessly and headachingly and eye-tiringly, until he has laid the filaments from the feathers of the bird's wings so closely together that they look like a piece of enamel."1.

It required a successful or a well-funded silversmith to be able to afford the raw materials to make tian tsui. Canton (in present-day Guangdong) became the main centre for the art. 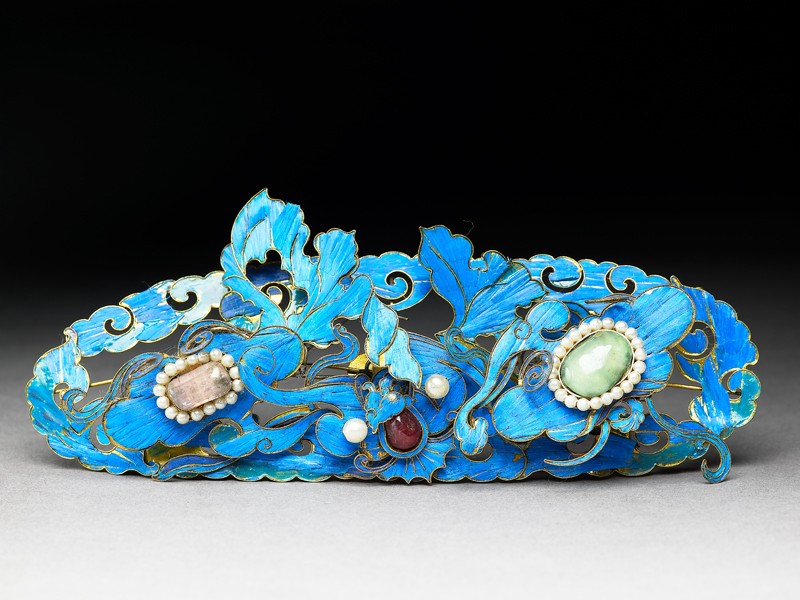 The 19th century was the swan song era for tian tsui. This was not for reasons of changing fashions but simply because the population of kingfishers had been decimated by the trade in killing them. The finest kingfisher feathers were to be had from Cambodia and were prized above all. The export trade of feathers to China was one of the largest export earners for the Khmer Empire and was used to fund the construction of many magnificent temples, including Angkor Wat. The mass slaughter of the kingfisher in Cambodia led not only to the species becoming almost extinct but it is believed to have contributed considerably to the decline of the Khmer Empire itself when demand could no longer be met! Cambodian kingfisher became such a status symbol in China that it could only be afforded by royalty or mandarins.

In the 19th century tian tsui was also being exported to the established Chinese communities in San Francisco, New York and in Australia.

In order to have kingfisher feathers at their brightest and most vibrant, they should ideally be pulled from a live bird! Needless to say the art of tian tsui is banned today. The art died in 1940 but some pieces may be found in Europe and in America. It is still quite obscure and as a result pieces can be acquired for relatively little cost given the sheer skill and time it took to create them.


Many beauties take the air by the Ch’ang waterfront.
Their embroidered silk robes in the spring sun are gleaming.
And hanging far down from their temples are
blue leaves of delicate kingfisher feathers 2.


Adrien von Ferscht is an Honorary Research Fellow at University of Glasgow’s Scottish Centre for China Research. Acknowledgments to Danny Cheng in Hong Kong for his translation skills.
This article was originally written for Meta Museum: Chinese Export Silver and the full version can be read here.

Written By: Ivan Macquisten Museums need to be more business-like in their dealings with collectors if they want to attract the most desirable works for loan or donation, two new reports by Vastari advise. The 2020 Global Collector Trends Report and The Finances Behind Collecting also reveal significant potential for

Have you ever thought about the responsibility that private collections can take to support equality, diversity and inclusion in museums? When you purchase works directly from artists who are women, part of minority groups or disabled, or through organisations that support these causes, you can change the future for museums!

We were very proud to organise for the first time a charitable event at one of our members’ homes in partnership with a prestigious collectors club! Our goal was simply to bring together art lovers and provide them with a wonderful opportunity to discover a treasure trove of Modern and